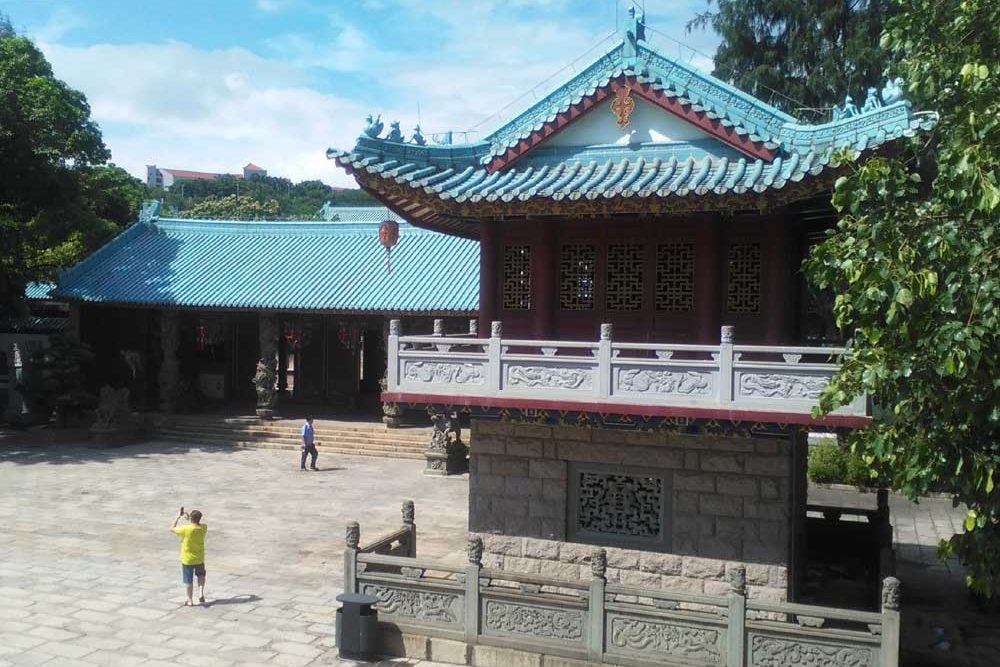 Since living in Shenzhen, I’ve often wondered if there’s any culture or history that hasn’t been miniaturized or replicated  and become the subject of a city theme park. So, we were very excited to discover the existence of an “ancient palace museum”, just two metro stops from our home at Sea World in Nanshan District.

We found the location on Google Maps (using a VPN) and hopped onto the local bus which stopped right outside our intended destination.

The bus drove on past Shekou Port and into new territory. Towering docks bordered an industrial landscape which left us wondering if the palace still existed.  However, our spirits rose when the bus stopped outside an old building decorated in traditional Chinese style and guarded by two menacing stone lions.

As we approached the gate we realized happily that this was not in fact a palace – it was a temple! For the first time since arriving in Shenzhen seven months earlier, we were finally getting a fix of Chinese history and culture! We eagerly handed over our 15 Yuan entry fees and entered, keen to explore our new discovery.

This isn’t a Buddhist temple – it’s dedicated to Tian Hou, goddess of the sea, and was built originally during the Song Dynasty in 1410. It’s been destroyed and rebuilt several times since and even now is undergoing another revival. The museum areas are being renovated and many of the exhibits had been removed for safe keeping.

The decorative interior of the temple buildings

The temple overlooks the massive docks and ship yard at Chiwan Port and you can instantly appreciate its importance, offering the promise of protection to sailors venturing out on long journeys across the South China Sea.

The benefactor of the Tian Hou Temple

It is said that a famous Ming admiral, Zheng He, was commissioned by emperor Zhu Di to sail west. When he approached the Pearl River Delta near to Chiwan, the fleet was halted in the wake of a ferocious storm. Goddess Tian Hou appeared to the emperor, saying that she had saved his fleet and that he should build a temple close by as an expression of his thanks. It seems Zheng He was in agreement and so he and his men built the temple, and he personally planted the original “wish giving tree” in the courtyard.

The legend of the Goddess Tian Hou

Tian Hou (or Matsu as she is commonly known to the coastal people of South Asia),  protects fishermen, sailors and others whose lives are dependent on the ocean. She’s worshiped in Guangdong, Fujian, Taiwan, Hong Kong and Macau.

In the main hall at the back of the inner courtyard, you’ll find the goddess herself. A large, golden, ornately decorated statue that dominates the (presumably) lesser deities of Caishen (Chinese god of wealth), and Guanyin (bodhisattva of compassion). In the corner is Tian Hou’s bed and furniture, used in the annual celebration of her birthday.

She was apparently born in 960AD on an island off the coast of China, into a family of fishermen. She gained her “goddess” status in part after saving her brother from drowning in a typhoon. An excellent swimmer, she lifted him effortlessly from the sea.

Legend has it that she either died while then searching for her father, who died in the same storm, or that she flew from a mountain top to be with the gods. In any case her fame spread and you can now visit more than 1500 temples dedicated to her in 26 different countries.

The temple is still a popular place of worship. During the two weeks before Tian Hou’s birthday (23rd day of the 3rd month of Chinese Lunar calendar), the temple celebrates, and visitors get a chance to witness tradition and history in action.

To the right of the temple, Zheng Hi’s “Celestial Tree” (possibly its second or third reincarnation), is weighed down with lucky red cards and ribbons, requiring the support of modern day scaffolding.

You can ease your troubled mind by inscribing your prayers and wishes, before tying them to the branches of this ancient tree.

In front of the main hall, incense burns in huge containers and walkways lead to further courtyard areas.

Incense burning at the front of the main hall

A decorative portal is guarded by two loyal generals, Chien Li Yen and Shun Feng Er. Their postures demonstrate protective abilities – they can “see” and “hear” from a distance anyone that might prove troublesome for their goddess, Tian Hou.

Between the main temple hall and the courtyard areas

In the main courtyard you are able to explore the two story drum tower, but the bell tower is closed, as are the museums until the renovations are complete.

Ian resists the temptation to bang the drum!

There’s been some remodeling here too of the original moon and sun, yin and yang shaped pools. They’ve sadly been replaced by a single, more modern carp fish pond. Similarly, the original statue of Tian Hou is also missing – hopefully not lost at sea!

The original sun and moon pools

Behind this pool the original sea wall towered, protecting the temple from the backlash of the ocean. Now a newer wall simply blocks the view of the shipyard. Alongside the pool you’ll find a small well, allegedly home to the spirit of a young boy who drowned in it.

Remnants of the old museum

Chiwan is still an important port on the Pearl River Delta. Close to Tian Hou temple you can also visit two other historically significant sites, the Left Fort and the tomb of the last emperor of the Southern Song Dynasty. All three sites can easily be visited in a morning or afternoon. We really enjoyed our visit and will return when the museum renovation is completed.

Places of worship throughout the temple grounds

Address: 9 Chiwan 6th Road, Nanshan District. Chiwan 6th Road runs along the north side and back of the temple.  The bus stops outside this entrance where you’ll find the ticket office.

Take the orange metro line to Chiwan and walk right along the road until you reach the temple. Alternatively you can take bus numbers 226, 355 or B819. A taxi from Sea World should cost you no more than 15 Yuan.

Paintings adorn the walls around the temple