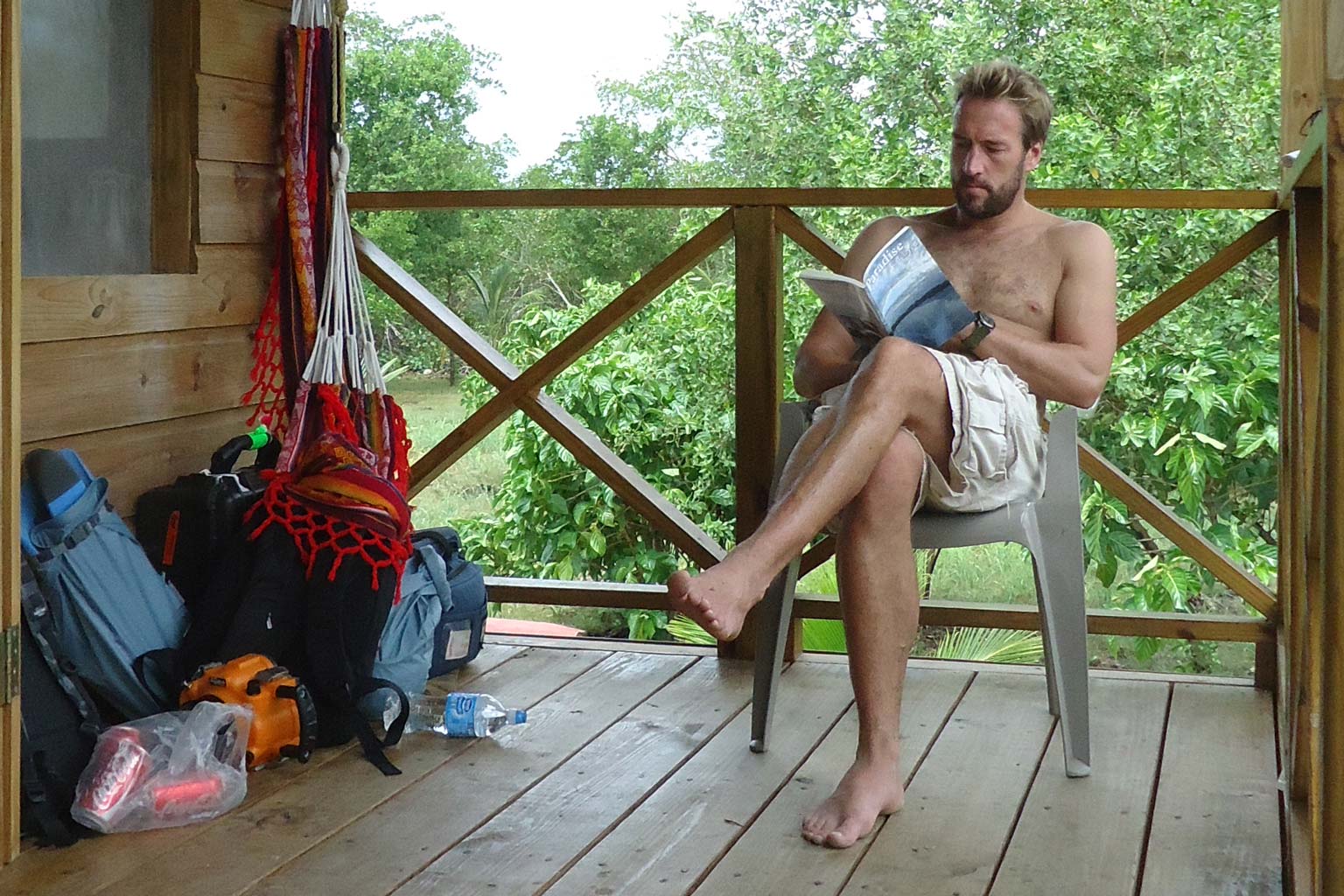 A week in the wild with Ben Fogle

Our “New Lives in the Wild” Filming with Ben Fogle

Since deciding to stay on in Panama with Ian, we’ve had a fun and busy time together. We spent Ian’s 50th birthday in LA with friends Teresa and Evan where we also attended a course to learn about public speaking. Ian had recently been invited by TEDx Vienna to talk about living “an unlimited life” and if seemed that this might be the beginning of a new career path. It was something he could do as we travelled, if he were able to sell “Usher’s Island”. We had been looking at ways to continue earning money which we obviously needed, to support our unconventional lifestyle.

“Sell the island?” I hear you ask. “But you’ve only just arrived”.

When I met Ian in London, he had already decided that his time in Panama was coming to a close. He had spent well over two years clearing the island, building a house and developing what was now a viable off-grid property. He was ready for a new challenge.

But, as in any new relationship, we had lots of things to discover about each other. We decided we would be happy to remain living inexpensively on the island while I also waited for my home to sell back in England. We both wanted to travel more and it was fun to explore all the different options – the world was quite literally our oyster – with no strings we could pretty much take off wherever we wanted.

However, there were to be a couple of distractions before we could make any decisions about our future, and one that would certainly take me outside my own comfort zone!

Ian was contacted by Renegade Pictures in London, who film the UK Channel 5 program “New Lives in the Wild”, featuring the presenter, Ben Fogle. Renegade had read about Ian’s story and wanted to know if he’d be interested in appearing on an episode for the second season. On hearing that I had recently given up my life in London to live with him in Panama, the producer was keen to chat, and before I knew it I had agreed to be featured alongside Ian in the hour long TV documentary.

We explained to them that we were trying to sell the island, although it hadn’t yet been placed with any agents. Ian had managed to secure an article with the Daily Mail, but with the market the way it was, we fully expected it could be another year or so before the island sold. The producer had no problem with that, it was a lifestyle that Ian had chosen and had been living for a couple of years. It didn’t necessarily have to be a lifestyle that would continue forever.

It was a beautifully hot sunny Tuesday morning when Director, Elliot and Producer, Kate arrived in Bocas del Toro. We had arranged to meet up with them in town for lunch and were feeling quite relaxed about the whole affair. We’d already had a couple of Skype conversations with them both in London, but still we were surprised at how laid back and easy going they were. I suppose we expected them to be a little more formal, but we were soon all enjoying our lunch and chatting through ideas for the show.

Ben Fogle, and the crew weren’t arriving until the Sunday, and Elliott and Kate had plenty of preparation and location scouting scheduled for us over the coming days. There was a lot to organise, not least because boat transport was involved in most activities and this was very much weather dependent.

We were both intrigued to discover more about the process behind the filming of a documentary and were keen and willing “helpers”. Ian has produced a fair number of YouTube videos and we both have a love of film, so this was going to be a very interesting experience.

We left Elliot and Kate to settle into their hotel and headed back to the island after braving a flash storm that saw us dangerously close to sinking our neighbour Kent’s borrowed boat, a second time! Kent was fixing our new engine so that we could get our boat back on the water in time for the filming. The crew had arranged to hire a boat and driver to ferry them and their equipment back and forth to the island and filming locations, but we needed our boat for our own use. Thankfully, both boat and new engine were waiting for us on our return.

Part of our weekly routine here on the island is to contribute to the broadcasting of the daily radio station via the VHF radio, quite aptly named the BEN network. This stands for Bocas Emergency Network and both local gringos and boat owners partake in the daily broadcast. Ian acts as Net Controller on Wednesday mornings and I do the weather for “Ladies Day”, on Thursdays.

We thought this would be a great opportunity for Ben Fogle to make contact with the local community. Kate and Elliot were keen to listen to the format of the program and so arrived at 7.30am ready for the start. They were impressed and it was agreed that Ben should partake on the following Wednesday. And so we had our first activity agreed. That was easy! Now we just had to work out an itinerary for the rest of the week. But that couldn’t possibly be considered until we had baked some lovely fresh olive bread and tucked into warm slices with lots of butter and blackberry jam.

After breakfast Elliot and Kate wanted to scout the local environment around Dolphin Bay and to see some of the swimming locations we had suggested. We had hoped that the guys would see dolphins and we weren’t disappointed.

We managed to get some photos of the dolphins surfacing in the bay before motoring on toward the “Secret Lagoon”. We tied the boat up to the mangroves and clambered across the roots into the hidden expanse of water. The locals are very adept at traversing the mangrove roots – we were all a little less nimble!

We took a well earned dip in the lovely deep, clear water around the outside of the lagoon where we put the fear of God into poor Kate, as we told her our shark encounter stories. She was to be the brunt of many shark jokes over the next week but she took all the jesting in great spirits. We had only spent a couple of days with her, but we both really liked her and felt very comfortable in her presence. We were going to “bare our souls” over the coming week so it was important that we felt comfortable and relaxed around the guys. Kate and Elliot reassured us with tips about how to remain natural throughout the filming and assured us that within no time we would forget that the camera and sound were there at all.

We spent the rest of the day talking through ideas and activities that we could film with Ben and were pleased when they confirmed that the building of the Helipad was still on the list. We worked out a preliminary schedule and it was soon clear that Ian was playing a vital part in helping Kate get these projects organised. Kate joked about him being part of her production team as well as “contributor” to the show!

Over the next couple of days we had to locate sheep, organise catering for the crew, visit the local fiesta at the Indian Village and check out the Chocolate Farm. Finally we would need to visit our Thursday afternoon social at “Valley of the Frogs” and talk to Jean about ordering a new canoe.

By now we had a better understanding as to why Elliot and Kate had arrived so much earlier than the rest of the crew. Elliot also explained that he had to try and formulate the story line for the program ahead of filming. Kate also had to carry out risk assessments and deal with all the local contractual and payment transactions. We were starting to see just how involved the process was.

With Director Elliot at Rana Azul

We had a brief day of rest on the Saturday before the arrival of the crew on the Sunday. Before I knew it Ben and Ian were heading toward the balcony with an entourage of people, including cameraman Geraint, known simply as “G”, Jackson, his young assistant, sound man Grant, and of course Kate and Elliot in tow. Elliot’s head was now buried in his monitor unit where he could see and hear exactly what was being filmed.

The crew in action

After a short period of nervousness, I quickly became at ease as we went about our daily tasks, me with microphone permanently attached to my cleavage. We shot more than 23 hours of film over six days and so it was quite an intense schedule. The crew stayed in town but Ben remained each evening on the island. He was an easy person to have around – Ian and he are quite similar. They established a great rapport which comes across well in the final program and makes for some very funny moments. Both Ian and I agreed that the overall experience was probably one of the best we had to date. The crew were such great people, and all felt like friends by the time they left.

The program aired in February 2014 and we were very excited to watch the final edited version. We had been at pains to ensure that our interaction with the community, both Indian and other local ex-pats, was portrayed. We particularly wanted to include our wonderful afternoons at jungle Pizzeria, Rana Azul, where filming had begun on the Sunday. Kate and Elliot seemed to understand how important this was to our lifestyle, having spent time with us. However, the final cut is made by the Executive Producers back in London, and unfortunately they removed all filming that portrayed time spent with our friends.

Overall we were really happy with the portrayal of our lives and had tremendous feedback from viewers. Our disappointment surrounded the fact that they made our lifestyle look much more remote than it actually was. They also got a number of facts and figures relating to the cost and development of the island incorrect. However, Elliot “got” our situation totally, when he had Ben summarise in the narrative at the end of the show:

“But now Ian and Vanessa will be going in search of their own adventure together,  a shared adventure”.

And what an adventure it is turning out to be!

If you would like to know more about what it’s like buying, developing and living on an island, Ian’s book “Paradise Delayed” details the trials, tribulations and joy of this adventure. He has recently updated the book to bring our story up-to-date.