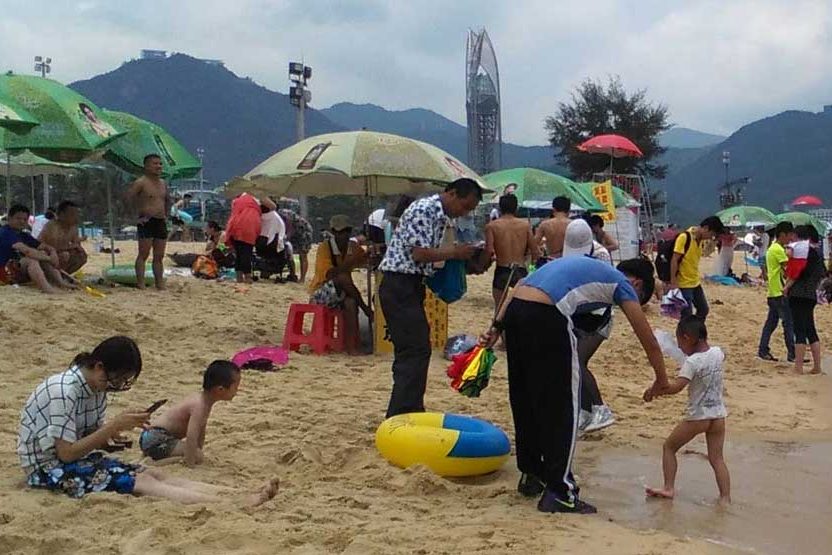 We lived for a year in Shenzhen, southern China, and from our home we could gaze across Sea World in Shekou, towards Hong Kong. There are no beaches to be found here, just paved walkways and modern promenades.

However, to the east of Shenzhen, just 12km from central Futian, you’ll find yourself in the Yantian district. Here the coastline stretches for 19km with beaches, mountains, islands and reefs. This is also the closest weekend getaway for locals and visiting tourists.

Yantian was established in 1998 and it is connected to the urban area of Shenzhen by highways and expressways that offer a quick connection by car. For tourists it’s possible to take the J1 bus all the way from Sea World on a route that meanders through Nanshan, Futian, Luohu and on into Dameisha, where you disembark at the central bus station. It takes around one and a half hours, probably much longer in rush hour and at holidays, but it’s a cheap option for tourists and locals alike.

Colourful shops on the way to the beach

I was sceptical about visiting Dameisha, but we were keen to see for ourselves whether the beach lived up to the Shenzhen tourist brochure’s claim of having the “longest beech (sic), soft sands and limpid (?) sea water”.

We’d seen the news reports of 160,000 people crammed onto this beach during Spring Festival, and heard locals talk of an alarm that sounds when more than 50,000 people frequent the beach on busy spring and summer weekends. So we opted to visit on a quieter Monday morning.

It was an overcast day, a little stormy with dark skies but the sun was warm enough to attract a steady stream of visitors, and we followed the small procession down through the town to the sea front.

I’m not sure what I was expecting, but as usual in China I was surprised. I felt as if I had been transported back to 1970s England as we passed by shop fronts full of beach paraphernalia including a mix of large floats, buckets and spades, bikinis and summer hats.

A walk around town

Dameisha is not a small coastal village, but a large sprawling town. It has an older, more typically Chinese area that leads to a modern mall alongside an equally modern marina with large hotels, including a Sheraton resort style property.

We ventured into a couple of smaller hotels to check out the overnight rates but were told they couldn’t accommodate tourists. This is not because they don’t want foreigners staying in their hotels. For anyone staying overnight in China you have to be registered by the hotel at a local police station. Some hotels simply haven’t got the license to enable them to do this.

Don’t ever take it personally. There are plenty of hotels where you will be able to make a reservation, but don’t leave it to the last minute at busy times!

The coastal road is lined with trees and you cannot see directly to the seafront, but we found our way to the beach entrance at the more western end of town.

The entrance is masked with barriers and for a moment we thought we would need to pay as is common at some other beaches. By watching other visitors we realised these are the “people counters” used to monitor the number of people entering, and that no payment is in fact required at Dameisha.

If you are used to five star luxury and deserted beaches, then you will be disappointed. But by English standards, it really isn’t that bad. The sand is beautifully soft, and despite warnings from locals, the sea looked clean. At least there wasn’t a flotilla of rubbish as I thought there might be. In fact, there were waste bins at regular intervals and everything looked extremely organized.

Dotted along the beach were lifeguards overseeing their own small areas of netted sea for safe swimming. There are activities including diving, (off a small island that can be seen from the beach), jet skis and even paragliding.

Far in the distance we could make out some unusual sculptures rising off the beach and we made our way along to investigate. Large angel-like figures rose out of the sand providing an interesting photo opportunity.

According to TravelChinaGuide.com – “these sculptures “depict the aspirations for a better life for the “drifting generation” – the young people who had unstable jobs and insecure living conditions during the 1940s to 1980s. Now the sculptures have become a symbol of happiness.”

We ourselves “drifted” to the back of the beach and were surprised to see rows of lockers. What a great idea – it’s always a problem on a busy beach as to what to do with your possessions. This solves the problem in a safe and practical way. There were also changing rooms and toilets, although I can’t vouch for their cleanliness when there are more than 50,000 people on the beach!

The clouds were gathering and the sky darkened ominously, so we wandered back to the local restaurants, most offering a varied selection of fish and seafood.

Seafood restaurants at the west end of town

Here you can select live fish from the stacked aquariums and eat a freshly cooked meal.

Live seafood and fish on display

We made it into a busy restaurant just before the heavens opened and sat undercover watching the street scenes as we ate our lunch. As we were due to fly out to Abu Dhabi the next day, we steered clear of the seafood and opted for a tasty tofu and vegetable lunch – just to be on the safe side!

There’s enough to do here for a day – a few activities, sunbathing, shopping and a walk around the town, but if you want to venture into a less crowded area I would suggest going a little further along the coastline to Xiaomeisha beach. It’s smaller and less busy, with an entrance fee of 30 Yuan. Camping is a popular activity here and you can rent a tent or take your own.

If you have children you can also visit Xiaomeisha Sea World  to provide some variety. You could also visit Wutong Mountain, a popular hiking spot, before arriving at Dameisha.

Map of the Dapeng Penninsula (courtesy of Shenzhen Party)

However, I have higher hopes for the Dapeng Penninsula, further to the east, which as yet we haven’t visited. Here I am told you can hike, visit smaller coves and even the historic Dapeng Fortress, built in 1394.

This is a relatively undeveloped area, by Chinese standards and you will find seafood restaurants in Nanao, as well as small bed and breakfast type establishments at Jiaochangwei. These small inns were formerly homes of fishermen and local families. They are much more characterful and many have been updated along the lines of small western boutique hotels.

As with most places in China you will no doubt hear both good and bad reports about this stretch of coastline, but we found it a pleasant escape from city life and look forward to exploring it further.

For more information take a look at some of these links: