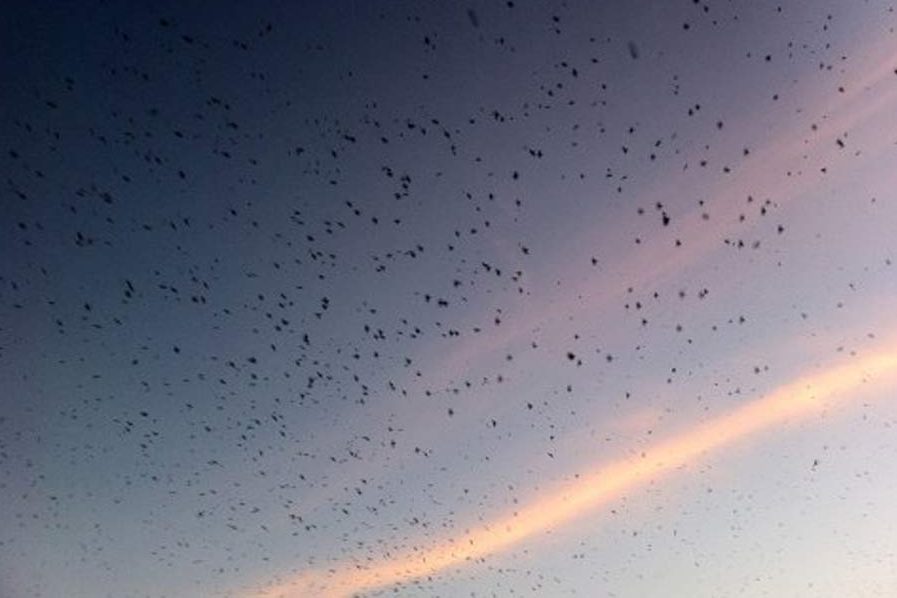 A spectacular natural event at a car lot in Austin

Last night we were invited to join the locals to watch an amazing spectacle in a parking lot behind a “Jack in the Box” fast food outlet in Central Austin. The instructions told us that we should bring a lawn chair, a hat and binoculars!

Until mid-August, Purple Martins come to roost here in just a few trees for the night. After migrating to Brazil for the winter, the birds travel back to their homes in the US and Canada each spring, where they lay eggs, raise their young and prepare for travel. Some birds leave as early as July, whilst others stay as late as October.

When not breeding, the martins form large flocks and roost together in great numbers. We are not talking about a few birds here. We were told that from 8.00pm until sunset, somewhere between 300,000 and 500,000 birds would swarm overhead. This was not to be missed, and so we headed down at around 7.30 in the RV to claim our spot in the car park.

Crowds gather in the car lot to see the Martins

When we arrived, the car lot was already filling up with couples and families, many seated and ready to watch a natural phenomena that has been occurring in this same spot, we were told, for many, many years. No-one seemed to know exactly how these birds “home” back to the same few trees each year and we were fascinated to see how so many would all find space to roost!

We found a spot and settled back to watch the skies. There were probably no more than a dozen birds scouting the skies above us when we arrived. But as sunset turned the skies pink, more and more birds swarmed in ever growing numbers, synchronizing their flight patterns just above us.

Purple Martins (Progne subis) are the largest of the North American swallows, averaging around 20cm. Adults have a slightly forked tail and have a steely blue-purple sheen, more pronounced for the males. The females have some lighter colouration on their lower belly.

It was hard to believe that we might see up to half a million birds in this one location, but during the next hour we watched mesmerized, as the skies filled with more and more martins performing aerial acrobatics with great speed and agility. Others dived from high above to join the mass that was congregating above the trees.

Purple Martins build their nests in cavities, however, following the release and spread of European starlings in North America during the 20th century, a severe population crash occurred. Where the martins once gathered by the thousand, in the 1980s they had all but disappeared, as they competed for nesting sites. This is when a new bond was created between people and martins which cannot now be undone. The martins became totally dependent on human-supplied nesting boxes, and east of the Rocky Mountains, martins nest almost exclusively in man-made houses where they can raise their families each year.

This human interaction has provided the conditions for a regeneration of the martin population, and we were thankful to be able to see just one of the consequential flocks in this small area of Austin.

As we scanned the darkening skies, the martins behaviour intensified. A dark cloud of birds seemed to fly in a circular frenzy as the horde grew in numbers. There were many “oohs” and “aahs” from the crowds as the birds swept back and forth across us before finally settling to roost.

As the evening came to a climax, a number of us moved toward the three or four trees that would be home for the night and were astonished to see just how many birds were claiming space in such a small area of shrubbery. As the birds settled, huddled together on  branches, they became still and calm. It was fascinating to watch as the remaining birds jostled to find a perch for the night, and how the intense chirping of the birds droned out the sound of the passing cars on the highway just beyond.

Lining up for a good night’s sleep

This was certainly an amazing spectacle that at times sent shivers down my spine. Experiencing nature in this way has a unique and moving effect, and as we the car park started to clear I felt privileged to have been part of this extraordinary event.

For more information about Purple Martins, check out the “Purple Martin Conservation Association”.

Their website can be round at http://www.purplemartin.org and they can provide help and information about how you can set up nesting boxes to ensure that future generations of martins have safe haven in North America.

Also visit the Facebook site for Travis Audubon for local events, at:

Travis Audubon promotes the enjoyment, understanding, and conservation of native birds and their habitats.