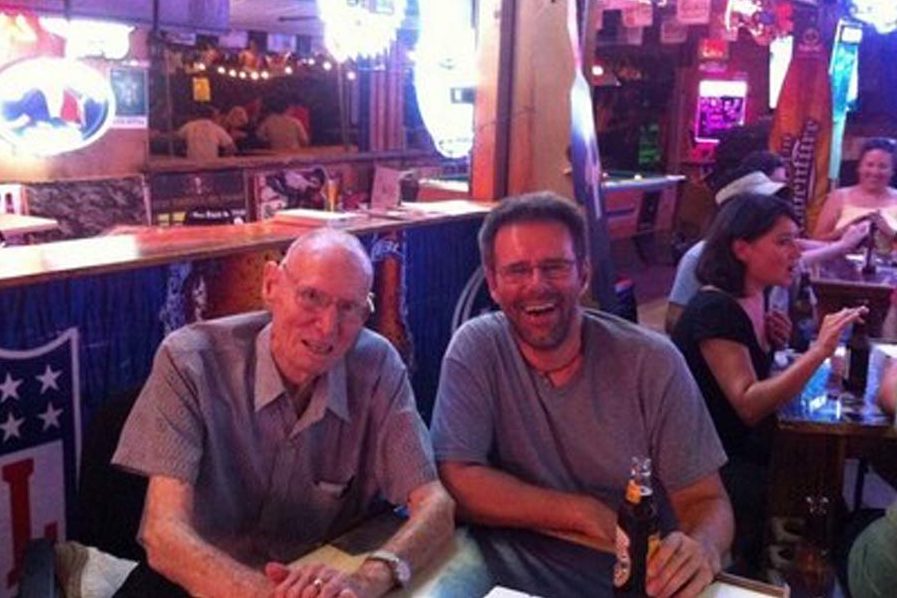 After our close call with immigration, we needed to reassess our overall journey. We now had just three more months until we would have to leave the USA for England.  We needed to get a move on, or we would not see all the National Parks that we had originally planned to visit.

It was Ian’s birthday when we arrived back in Austin from Mexico, and he chose to spend the evening at “C Hunts Ice House”. This was a small bar we had found in North Austin, whilst cycling to the thrift store one day. We had enjoyed a few early evening beers while listening to good old country music! It was just how I had imagined an authentic Texan bar to be.

Michelle came with us to join in the celebrations, and no sooner had we entered the bar, we were engaging with a couple of locals who on hearing it was Ian’s birthday, bought us all a beer. We sat with them as they told us a bit of history about the bar which was owned by Chester Hunt. They pointed out Chester, an 88 year old, sat quietly at his domino table on the far side of the bar. “Go and talk to him, he won’t mind”, suggested our new friends.

We all went over to say hello to Chester, and before we knew it Ian and I were sat, enthralled as he told us the history of the bar.

Chester’s wife (now passed), had bought the property over 50 years ago for $12,000 and they had made a business, first as butchers and then as a traditional “Ice House”. More recently it had become a bar and Chester still lived above it whilst he ran his “posy” of women, all university graduates, who looked after his customers with extreme professionalism. It was an all “cash” bar and we quickly discovered how astute Chester was and what he thought about America, its current difficulties and the future of money as we know it!

Chester was fascinating and we kept him talking for hours until he had to retire to his oxygen machine! What a great experience and one of the most interesting older men I have ever listened to. We promised to return to his 90th birthday party in a couple of years!

The next day we attended our last “Friends of Peter” meeting at Panera Bread, and had a lovely Mexican lunch after with Jerald and Venus. That night, on Laurie’s recommendation, we went to watch the swarming of Purple Martins above a car lot in central Austin – see separate blog entry for more on this.

Then we were off – Michelle was away on a weekend course, but we managed a last afternoon with Laurie and Damon. It was good to see their new house before leaving, which had a ready made RV slot beside it and was home for our last night in Austin. It was beside a railway line, and it made for an interesting night as the goods trains hurtled past at regular intervals, causing me to hold my breath as it sounded as if they were heading straight for the van!

And so our time in Austin had finally come to an end.

Thanks to everyone that made our stay in Austin special – Laurie, Damon, Michelle, all our new friends from “Friends of Peter” and all the other more casual acquaintances we made along the way. Austin felt like home and I’m sure we will return there again one day!